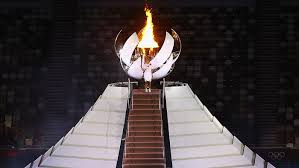 7 HIM of Fleming Island, including 1 FNG, gathered in the gloomidity at Asgard for an Olympic themed beatdown.  How original during this time of year, right?  This was a beatdown YHC led during the Rio games of 2016.  The pax at the original Anchor “loved” it so much, he waited for another Olympic year to bring it back.  The Asgardians were not amused.  Disclaimer given and we were off…

One of the mainstays of the Summer Games is Track and Field.  Here at Asgard, we have no track;  however, we do have a field.  A nice, large, and moist field…

In the Olympics, they use a baton during the relay races; well we didn’t have one of those either, so we used cinder blocks instead. This relay race involved Clock Merkins. Two teams, one of 3 and one of 4 pax, with the 3-man team sending a pax twice.  Each team lines up behind each other in the order of when they run. First PAX of each team is the first runner. The runner carries the block and performs the following exercises at each cone. Repeat on the way back to the start (remember- no track, just field).

While the runner is doing his routine, each PAX member is doing AMRAP of the following exercise with coupons until the runner passes the “baton” (1st runner then does 4th runner exercises and so on):

Next event was the “hurdles”.  Same two teams competing.  Unfortunately, we had no hurdles; fortunately (depending on who you ask) the pax do know how to plank.  So we did Railroad Tracks in low plank for 50 yards.

Well, at Asgard, we also don’t have a pool.  But once again, we do have pax who can high plank, and the pax swam through the Tunnel of Love instead.  Hero-rule applied for this race.  Who knew with less pax, these last two relays would fatigue you rather quickly…

The three-man team of Crotchless, Sasquatch and Roddy was awarded the win for the races.  They also demonstrated great team work as instead of having one member run the Block Clock Merkin Relay twice, they did the fourth round as a team.   For their victory, they were permitted to throw the shot put.  Well, once again, we didn’t have a shot put, but Big Bird did.  Unfortunately, he wasn’t posting today, and the shot put was at Snuffy’s house.  However, once again, YHC improvised with a 5-pound medicine ball.  The rest of the PAX arrived to the medicine ball landing spot via various modes of transport (including sprints, lunges, broad jumps, etc…) as deemed by the Q and performed the exercise of the thrower’s choice.